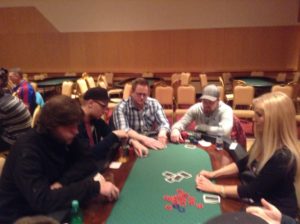 Name? My name is Sasha Drcha.

Have you played in a poker tournament abroad? I played poker tournaments in almost every country in which I spent more than a couple of days – most recently in Slovenia, Spain and France. However, I believe that reaching the final table in Borgarnes is my greatest success as I have never before played a live tournament for full 3 days and with so many serious and respectful players.

How would you describe yourself as a player (playing style)? I find it difficult if not impossible to describe my poker strategy since it depends on so many factors. The most important aspect to be considered in every poker game are other players. Poker is always about people rather than cards. I don’t believe there is one universal poker strategy that I could recommend.

Most rememorable hand from Borgarnes? There were many memorable hands in Borgarnes. The one that left the greatest impression on me is the one with AA against KQ when Helgi Kristinsson hit two pairs and I thought I was done, but the board paired a 9 and I won the hand with two bigger pairs. That hand decided bubble for the final table. We all need a bit of luck in poker sometimes J

Toughest opponent in Borgarnes? I think that the toughest opponent I had  in Borgarnes  was Daníel Már. He’s an excellent poker player and in addition he was sitting to my left with his big stack of chips, so I felt my hands were tied, not a very great feeling.

Who would you want to play headsup and why? It’s hard to say who you’d like to play heads-up with. All these players are really great and heads-up with any of them will be a challenging and thrilling experience.

Favorite poker hand? My absolutely favourite hand in poker is 810 of spades.  J

Do you have any other hobbies than poker? Playing poker is definitely my greatest passion, but I love other card games too and I cannot imagine my life without sports. I pretty much enjoy every aspect of life that encourages competition. I think having challenges is how we stretch our limits, learn new things and eventually become a better version of ourselves.

Do you have a good story from you poker career or a memorable moment? Well, there were  many unforgettable situations I found myself in while playing poker, but there is one that stands out :

My very best friend and I entered this one tournament together. Players were dropping out and in the end it was just him and me. We had about the same amount of chips and I suggested we split the prize, after all we were living together at the time and shared everything. He dismissed my suggestion telling me he never ever splits and it’s a matter of principle he has no intention of breaking for a friend or no friend. I could not believe what he was saying and I just got so angry and tilted, I didn’t care about poker anymore, played it stupidly, lost and was about to leave all gloomy and disappointed. It was not a matter of victory or loss, it was just that I believed we were better friends than that. He went after me and asked me what was wrong as if it weren’t apparent!

Well, lets just say…he did text me while we were playing heads-up, but my battery died and I didn’t see the message until later. It went : Of course we’re going to split regardless of who wins, but lets just play, I have a reputation to keep J

Who will win the tournament this year (if it will not be you)? As for the person most likely to win this tournament I will just quote “On the final table anything’s possible!”, all these players are excellent and one guess is as good as the other.

Final words? Good luck to all!